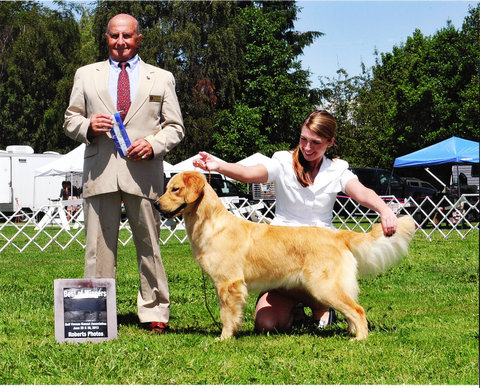 Achievements:
This litter was an all nighter at a emergency vet close to my house. Turned out the emergency vet on call had a male that was a grandson of my dear Emily and had just passed away the about a month prior to this event. To make a more bittersweet whelping the vet, Cindy, was able to get the first and only BOY puppy out. As a result Cindy felt this was a meant to be puppy for her family. Hence the “night” theme for this litter.

Izzy is turning out nicely and is a very “up” girl, which really shows in the ring that she is one happy dog ! She is pointed in the U.S. at just 14 months. She needs one more win in Canada for her CH. there. Along the way in Canada she has 3 best puppy in breed, two RWB, WB and a second in an all breed sweeps and all from the 9-12 month class. She got her second points in Canada at the Golden Retriever Club of B.C. under a U.S. judge from the 12-18 month class. There were some very nice bred by and open bitches shown so I was quite thrilled by the win. Hopefully Izzy can get that third win in Canada this fall, 2013.